In September 2016, the Rev'd Canon Timothy M. Dombek became Rector of Advent Episcopal Church in Sun City West, Arizona; he also serves very part-time as Canon for Stewardship and Planned Giving for the Diocese of Arizona. Timothy and his family moved to Arizona in late 2007, when Timothy became Canon to the Ordinary for Bishop Kirk Smith, a position he held for six years before becoming Canon for Stewardship and Planned Giving in 2013. Prior to arriving in Arizona, Timothy served as rector of St. James Episcopal Church in Greenville, South Carolina.

In 2014, along with co-author Michael Durall, Timothy published the book, Making The Annual Pledge Drive Obsolete: How Churches Can Get Out of This Business Once and For All, available from VitalCongregations.com and for Kindle at Amazon.com.

From 1996 to 2000, Timothy served as school chaplain at Heathwood Hall Episcopal School, a K-12 college-preparatory school in Columbia, South Carolina, while also priest-in-charge of St. Barnabas Episcopal Church, in rural Jenkinsville, SC, one of the five historic African-American missions in the Episcopal Diocese of Upper South Carolina. The Dombeks moved to Columbia in 1996 from Church of the Transfiguration, in Dallas, Texas, after Timothy served a four-year curacy as Family Life Minister. Timothy graduated with his Master of Divinity in 1992 from Seabury-Western Theological Seminary, in Evanston, Illinois.

Before ordained ministry, Timothy, worked five years as a Certified Financial Planner, following a six-year stint in broadcasting as a radio announcer in his home state of Indiana. He and his wife, Beth, a retired Elementary school resource teacher, have been married since 1990, and they have one adult child, Jonathan. 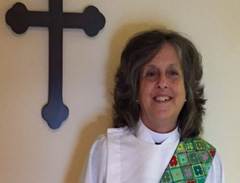 Deacon Debbie Greenleaf started attending the Episcopal Church in Idaho in January 1996 and in 2002 joined St. Stephen's Episcopal Church in Boise. She was at once drawn to join the Mission Committee at the church and became actively involved in their many outreach programs. In 2010, Debbie started the process to become a deacon. She wanted to not only help her community but felt the need to inspire others to go out and serve as well. In the fall of 2012 she attended the Utah Ministry Formation Program in Salt Lake City, UT and was ordained on December 6, 2015 in Boise.

In March of this year, Debbie and her husband of 45 years moved to Sun City West and have been attending Advent Episcopal ever since.

Canon Geoffrey Dibbs was born in Knaresborough, Yorkshire, England.  He was educated at Manchester University, Oxford University and the London School   of  Journalism.  He holds a Doctor of Theology degree and is a Fellow of the Philosophical Society (England).  He also graduated from Ryerson College,   Toronto, in TV production.  He served in the Royal Air Force from 1942 to 1947 in the Signals and Chaplains departments and the Royal Canadian Air     Force as a chaplain from 1966 to 1970. His pastoral career began with his being a curate at St. Mary's Droylsden, Lancashire, England.  From 1956 to 1959,   he was Rector of St. Luke's in Chadderton, Lancashire, and in 1959, he was called to be Rector to Her Majesty Queen Elizabeth in the parish of Burton   Agnes, a position he held from 1959-1966.

In 1966, at the invitation of Bishop George Luxton, Canon Dibbs, his wife, and children moved to Ontario Canada.  He served as Associate Rector of St.   James, Stratford, Ontario, from 1966-1968, and was Rector of St. Alban's Church in London (Canada), from 1968-1989.  During this time he graduated   from Ryerson College in Tornoto, as a television producer, and produced radio and television programs for the diocese.  He was editor of the Huron Church   News and Media officer for the Diocese of Huron.

Canon Dibbs had been serving at Advent as Associate Rector for Pastoral Care from early in 1993 until the end of 1996. Canon Dibbs served as interim rector in 1997 and continues to serve Advent, even in his retirement. 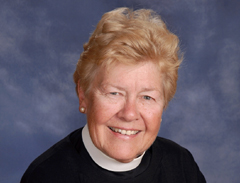 The Reverend Janet R. Gooltz, DMin began theological studies while raising four children. She is a graduate of Vassar College and Weston Jesuit School of Theology and holds a Doctor of Ministry in Pastoral Care from the Graduate Theological Foundation. Following ordination in 1984 she became the ﬁrst Director of Pastoral Care at Mount Auburn Hospital in Cambridge, MA. She is board certiﬁed by the Association of Professional Chaplains.

Janet Gooltz spent the last 25 years of her paid work life as Director of Pastoral Care and Ethicist at Mount Auburn Hospital in Cambridge, Massachusetts.  There she worked extensively with patients, their families and physicians as they struggled to make good end-of-life decisions.

On retirement to Sun City West in 2008, she became a member of the SCW Citizens Corps Council and was among the initial group of Fire Corps Volunteers.  In that capacity she coordinates the district’s CPR program, Emergency Preparedness Awareness Trainings and makes various other presentations for the District.

She is a graduate of Vassar College, holds Master of Divinity and Doctor of Ministry Degrees and is ordained in the Episcopal Church.  She also preaches frequently as a volunteer  on the clergy staff at Advent Episcopal Church.  Janet’s four children, her husband’s four, and their surrogate daughter  have given them 21 grandchildren.  Her user name is Retired Sorta. 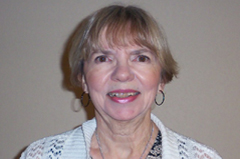 Sharon Mather is a "cradle Episcopalian". She is a graduate of Education for Ministry (EFM), serves as a lay minister, and belongs to the Order of the Daughters of the King, Clare of Assisi Chapter. Other parish involvement includes Advent's ECW, Helping Hands for Children in Crisis, Advent's Neighborhood Link Coordinator. She is licensed by the Diocese of Arizona as a Pastoral Care Leader and as such will be doing pastoral home and hospital visitations offering the comfort of anointing, healing prayers and Eucharist.

With a Masters in Theology from Fuller Theological Seminary, summers studying at St. Vladimir’s Orthodox Theological Seminary, Yonkers, NY and a desire to serve, Cecily Lansford worked as a prison senior chaplain for twenty years in the Arizona State Department of Corrections. She counseled, taught, advised and prayed her way through the State Hospital, Juvenile Corrections, the Women’s Prison, Maximum Security, and Death Row. Cecily has been a Superior Court expert witness on religious issues, and was a consultant for Juvenile Corrections on religious issues.  She is an FBI trained hostage negotiator, and source/subject of an A&E documentary, “Prison Romance”: Why Women Marry Death Row Inmates. In 2009, Cecily retired to be caregiver to her husband who suffered with Parkinson’s.  He died January 2018.

All of Cecily's professional experience has been in serving and caring for persons with dramatic life situations. Many were able to find their way, because suffering was the instrument which served as access back to God.  It was a means of purification and return.  It revealed God, and led to God.  It is my privilege to accompany persons through their suffering to the grace and mercy of God. 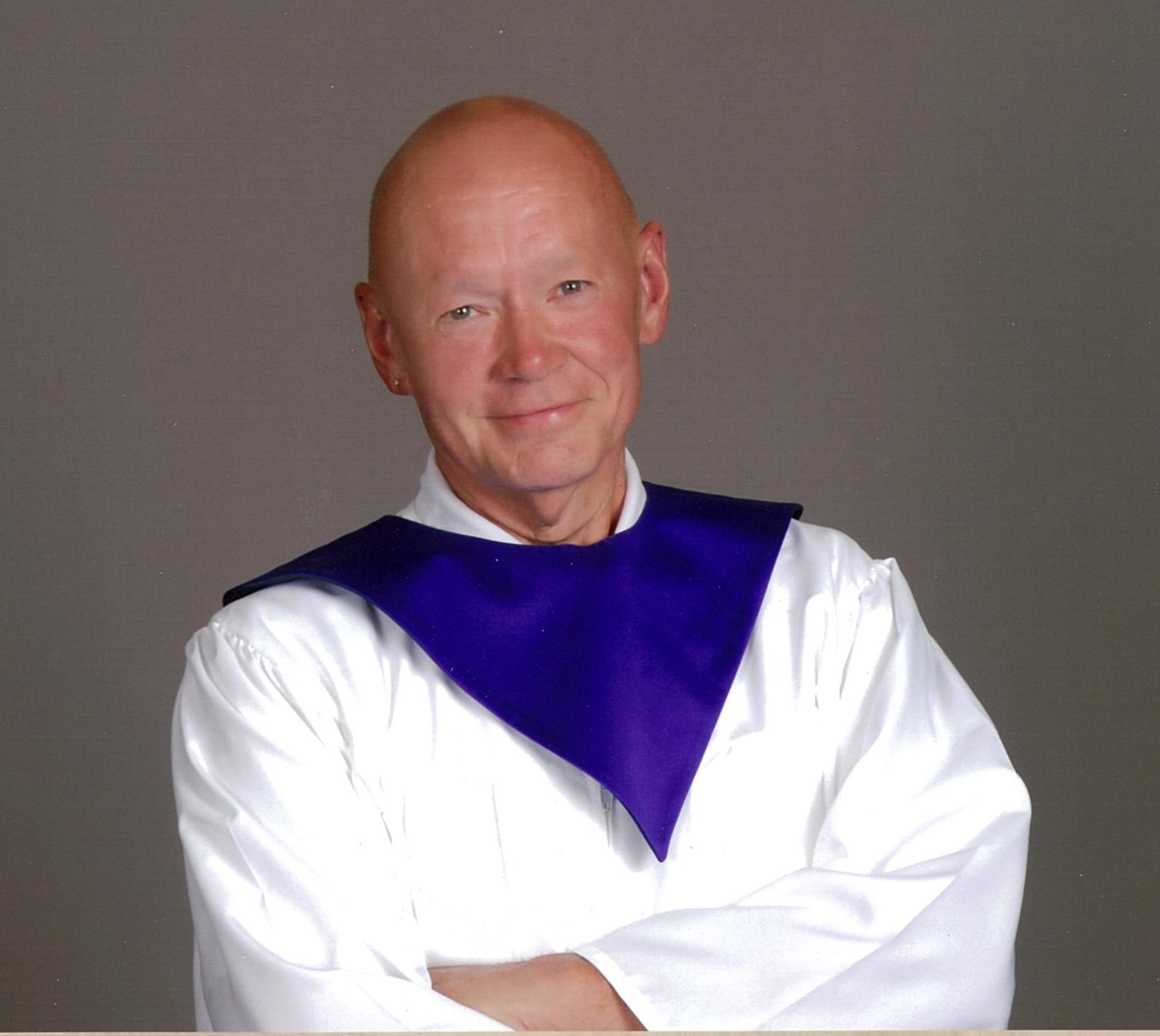 Eldon Wold, Jr., was raised on a farm in Ottawa, Illinois.  In elementary school I began piano lessons and began playing for Sunday school services at our family     Lutheran church when I was 10 yrs old.  Organ lessons were added and I began playing for church services at age 13.  I studied piano and organ   through high school.  I was in a spectacular high school choir.  I've told many people, "I was in the best high school choir you've ever heard". While we   sang mostly a capella, I received the Chopin Award given annually to an accompanist.  I also played organ for my high school baccalaureate service.  I   continued organ and piano in college (Southern Illinois University), was a member of the Dean's College Scholar Program and completed a double   major in Music Education and Piano Performance.

During my college days, I always knew that I wanted to retire to Arizona.  After completing 35 years of teaching in Illinois......high school choir,   elementary music and private lessons, I moved to Surprise in March, 2017.  Last winter was the best winter of my life.

Last January I attended a service at Advent.  Having spent 19 years in Episcopal churches (52 yrs total!)..... I enjoyed many things about the service and the acoustics of the church.  Attendance was good and I felt there was definitely potential for some wonderful congregational singing.  So:  fast-forward nine months and I'm happy and excited about beginning a new adventure at Advent Episcopal.

Kimberlee Stevens joined the Advent staff in February 2019 with 30 years of experience serving in various Christian denominations and judicatory offices. Kim has three adult children; earned a degree in Business Administration and lives in Anthem, AZ. Through the years it has been her privilege to assist clergy and lay people spread the Good News of Jesus Christ to those who have yet to hear His voice.